Traction, less can be more

At JMG Porsche we have a reputation for improvement and modification of all Porsche models, but the most important aspect to understand is not the technicalities of modifying the Porsche, but understanding what the customer wants, which sometimes the customer might not even be sure of.

Sometimes the project brief from the customer is very easy to understand, such as the car being a dedicated race or track car, and improved lap times are the objective. However, other times it is important to talk with the customer in great depth to try to understand not how they would like the car improved, but why they might want it to be improved, which may sound like the same thing, but often it can be completely different.

We live in a time where sports cars are marketed on the basis of their lap times around the Top Gear track, around the Nurburgring, or even specifications of performance figures which often have no reflection in the real world.

The brake horsepower (BHP) of a car can be very deceptive, in an age where very domestic cars can have 200 BHP, yet will have little more real world performance than you would expect from a domestic car. By domestic car I do indeed mean the average family saloon car. The problem is, BHP is probably the most misleading performance figure in the world, as it is only a measure of the cars peak performance in a very narrow rpm band. It would be relatively easy to build an engine to produce a higher peak BHP figure that would be slower than a car with a lower figure. Confused? then read on...

Torque can likewise be deceptive, but a much more realistic measure of a cars performance. Whereas BHP can be a good measure of an engines efficiency at a given rpm, which can be deceptive, typically an engine that produces a good torque figure will be a powerful car.

Typically high BHP is a measure of an engines performance at higher rpm, where as torque is a good measure of an engines performance at lower and mid range rpm. This is because BHP is calculated from torque, which means that bellow 5200 rpm, torque is important, above 5200 rpm BHP is important and if you think about it, even when you are driving your Porsche hard, what percentage of the time are you above 5200 rpm? Not only this, but in day to day driving, how much of your time is spent above 5200 rpm?

A road car which is exciting to drive, will often (but not all cases) deliver plenty of torque. Not many tuners will tell you this, but when they produce higher BHP, they have done so at the expense of torque, which in reality, will have made the car feel a little more powerful, but in many cases will have actually made the car slower and possibly less fun to drive.

The problem is, building horsepower can be relatively simple. Building improved torque takes a scientific approach and a great deal of experience. The side effect of that, is everyone seems to advertise their product adding "upto X percent more BHP" or power, which is a fools paradise.

So, you might be asking why this article is called "Traction, less can be more".

Well, much of my professional life as a Porsche tuner, the emphasis has been on making a car faster to win races and as someone who likes to please my customers, a large amount of my work has been to help customers have more fun with their cars, by delivering improved torque, even though it may not provide massive amounts of additional peak BHP which many tuners may love to advertise. The important thing is making the car more exciting or more fun to drive.

When developing improvements for Porsche suspension, the emphasis has always been on improving grip, especially for traction to cope with additional power, or for cornering grip to increase the speed at which the car can turn without loss of control.. That was until a few months ago, when something that I had completely overlooked for the last 20 years struck me like a bolt of lightning.

At this point, this article is going to become a confessional, but there is a chance that some of you may actually nod your head and agree you have similar memories.

Back at the tail end of the 1980's, I bought my second ever car, a car which everyone told me "did not handle", people told me the first thing I should do was install a couple of bags of cement in the back of the car to help it grip the road, but I never did anything of the sort.

Not only this, but in my memory at least, even though I have owned tens of Porsche sports cars since, this one car still remains in my memory as the most fun car I ever owned. 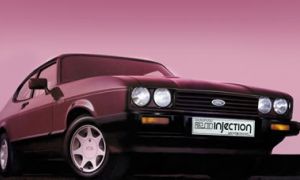 With only 100 BHP and 112 ft lbs of torque, this was no power beast, effectively less than a quarter of the power of my tuned 80's 911 Turbo, yet I remember it as being more fun.

The people who said the Capri would not handle, were right, on corners, especially in the wet, the Capri exited most bends or roundabouts slightly sideways, usually self inflicted, and usually with a big grin on my face, and at speeds of as little as 20mph.. But I am too much of a grown up to admit that the cars poor handling was what made it the most fun car I ever owned.

With the Porsche 930 (80's 911 turbo) there is more than enough power to push the car sideways with smoke billowing from the rear tyres. It can even do it it seriously high speeds, but you dare not ever do it on the public highway and even on track days there is an element of doubt as to if the moment of boisterous sideways fun will end in mortal danger and probably a great deal of regret.

Besides, it is childish to enjoy such things, I should be happy with the improved suspension, the masses of grip, the great weight transfer and of course the copious amounts of sheer power available on demand. Shouldn't I?

In the latter half of 2012, something happened which not only made me think again about the Ford Capri, to re-assess an aspect of a car that is for fun, and has bought me to making my confession, and it has again be bought about from an unusual motoring manufacturer, who seems to have made a really odd choice. Toyota released the GT86. 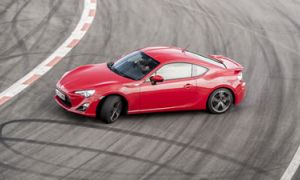 The GT86 has had rave reviews, the motoring press have fallen in love with the car, and if you read between the lines, this car has more in common with the Ford Capri than Toyota, the motoring press at large and even the motoring public would like to admit, and it is not just because it is rear wheel drive, just like all the Porsche I have owned.

With 200 BHP, the Toyota GT86 is not endowed with massive amounts of power, but it shares the same tyre widths by all accounts as the Toyota Prius. Which of course means that it is tail happy, or in a more scientific description, prone to power over-steer due to limited grip at the rear tyres.

My 930 is prone to over-steer, but with all the engines weight over the back wheels, some mastery of traction and handling, it is still remarkably good at going around corners very fast. As long as you keep your nerve, it will often continue around a corner much faster than you dare. But go too fast, or use way too much throttle, or worst of all back off of the throttle, and the car is likely to get so much over-steer, in a millisecond it will be facing the wrong way and probably still moving at great speed!

This is one of the excellent things about the 930 and all 911's, you need a great deal of skill to be very fast in one, there is a constant challenge of driver and machine, while ironically also driver and machine work in great harmony, however over-steer is to be avoided, as it can turn nasty very quickly.

However, the Ford Capri and Toyota GT86 have one thing in common, at even low speeds of 30 mph you can develop over-steer which is easy to control, feed in more power and the rear will slide progressively wider, reduce the power and the rear of the car will sweep back into line. The difference between the Capri or GT86 and almost every Porsche I have ever owned is that with a Porsche, the car has been designed to have ultimate grip, the Capri and the GT86 have been designed to be fun.

So now that the motoring press, as well as many customers I have made my confession to have admitted that a car with poor handling can be fun (as long as it is a refined version of poor handling) I have felt compelled to make my confession.

So does this mean I will be buying a Ford Capri or Toyota GT86?

No. The Capri would be a disappointing exercise in removing some rose tinted glasses... The GT86 will just be another domestic shopping car with one nice feature. 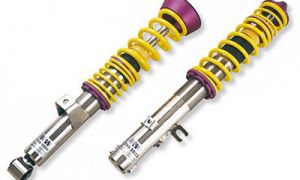 No. Stable and high quality suspension is still of utmost importance, but the way it is specified and used, does for some people, need to be carefully analysed and provided to give them the best experience.

Does this mean I will be becoming a "to fast to furious" drifter?

No, I have no interest in going everywhere sideways, terrorising the public or destroying tyres for the sake of it, but I like some people may be interested in adding another dimension to the driving experience on demand and when it is desired, but not at the expense of the Porsche experience.

So what does all this mean?

Unlike many Porsche improves, I have spent years explaining to Porsche road users looking for improved performance that Torque may be what they crave rather than all out peak BHP, but now I can admit that perhaps the ultimate track machine may not be the ultimate fun machine, perhaps for some customers at least, the avenue for a more fun Porsche may be one where the suspension still requires improvement, but to make it more progressive and tolerant of over-steer, rather than one which tries to completely remove it, with the inevitable result of over-steer becoming something to fear.

As a result, this year my plans for a track day car have changed. Rather than building a massive performance beast which handles like it is on rails, this year I plan on experimenting with a couple of Porsche designed to be fast, yet fun and hopefully the ability to enjoy over-steer rather than completely removing it. Performance will be kept in moderation, maximum speed will also not be a target, but light weight and progressive over-steer will be a specification which remains high on the list of desired attributes.

Some say he is the love child of a Cray XMP supercomputer of the 1980's and a Sinclair C5. That he can hear the tinkling of binary traveling through the internet.

All we know is he is the webmaster of JMG Porsche.