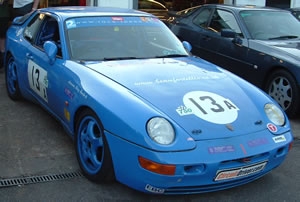 From a 968 Club Sport poorly converted to turbo power by another specialist, into a JMG 2.8 968 Turbo, a typical JMG Special Projects car.

The Porsche 968 has always been a very capable car, with near 50/50 front to rear weight distribution it handles like a dream, big brembo brakes with upgrade paths allow it to outbrake most cars, and a 3.0 Litre 16 valve engine with variable cam timing, the performance is sharp too.

Porsche made four special 968 Turbo RS models for racing, and a handful of Turbo S models for the road.

With JMG Porsche having close contacts in the Porsche motorsport division in Germany and a level of involvement in 944 Turbo Cup and 968 Turbo RS development, we know exactly what's needed to build a 968 Turbo or Turbo RS, both in the original factory way, but also using the very latest in technology.

When this customer called us for some advice about his 968 Club Sport race car, it quickly became apparent that the customer had another specialist install a 2.5 944 Turbo engine into his race car, which was now smoking heavily. Our advice was simple.. Bring it to us so we can check the engine!

Compression and leakdown tests were performed and a borescope camera was used to examine the inside of the engine without a full stripdown. It became quickly clear that this engine had scored bores.. Running the engine quickly highlighted a knock from the big end bearings.. It was clear that this engine needed a rebuild. We also spotted a multitude of other problems with how the engine had been installed, which did not make us very confident about how well the conversion was performed or how the engine had been built in the first place.

The customer was not impressed, it turned out that this was the third engine the other specialist had supplied! To top it off, he had never been impressed with the performance.

After a long chat with the customer, it became clear what he really wanted was maximum performance, but in the race series he raced in, with a turbo charged engine he had to have an engine with less than 2.9 litre displacement to qualify. This was clearly a candidate for being a JMG Special Projects Division job.

We asked the customer to leave it with us for a couple of days so we could formulate a plan. More importantly we wanted to read the regulations for his race series to see what we could and could not do to his car.

If a diagnosis, modification, repair or build is likely to evolve unto unexpected tasks, research, development, prototyping or, as in this case, may turn into a can of worms, we recommend its worked on as a special projects car, simply because it may be impossible to estimate the duration of the car's stay, what we might find, or what additional work the customer may request. Cars like this can run a mockery of our diary for the usual work of a Porsche specialist, this way the car will be worked on specifically by our top technicians without diary constraints.

A Plan was formulated, a new JMG 2.8 Engine (Rather than the factory 968 Turbo RS 3.0), with a custom programmed engine management chip for the standard 944 Turbo engine management system, a larger hybrid ball bearing turbo, uprated exhaust, bigger injectors, bigger fuel pump and a free flowing air filtration system. We estimated 425 BHP and 500 pounds of torque with full boost being possible as low as 2800 RPM.

The customer authorised the plan, the engine was built, but something was still nagging away at me, why did this car go through so many previous engines?

The old engine was sat in a corner of the workshop looking very sorry for itself, so even though the customer had not authorised a postmortum, he had just wanted us to throw it away, we decided to perform a post mortum anyway.

The engine was filthy, covered in corrosion, but it did have all new gaskets. When we build an engine, we make sure every part is either new, or if re-used it would be cleaned, bead blasted and if needed, replated. This engine was something else, it looked like an old used engine, where someone had used new gaskets, had used gasket sealant where none should be used, had a cracked oil pickup pipe, a multitude of other sins, including the belts were not even set correctly! Even the crank was ground undersize but standard bearings had been used! But the oil pickup was the smoking gun.

Back in the day I had my mentors, one of which used to refer to poorly built engines as "Turkeys", the old engine was the worst "Turkey" I had ever seen!

Now knowing that the previous engine, or engines, had never had a chance of living a long life, we were confident that we could install the nice shiney new 2.8 Turbo engine into the race car.

It fired on the first turn of the key, ran sweetly, was tuned and went off on a car transporter headed for its first venue, the famous raceway of Spa, where it performed faultlessly and put a massive smile on the face of the customer, with performance blowing everything into the weeds.

The moral of this story? JMG Special Projects Division, as with JMG Porsche, know what they are doing, you might save a few pennies going elsewhere, but often you will find that you will just end up having to have all the work done again by an expert.